What if I told you that I didn’t like pizza?

What if it was true…cause it is.

Now what if I gave you instructions on how to make a pizza that EVEN a picky non pizza eater liked…would you try it? Or just maybe let it pass by?

If I were you I wouldn’t let it pass too far, because it’s far to easy to let slip through the cracks of a ‘way to busy’ kind of a day.

I had one of those, the ‘way to busy’ kind of days last Thursday let me just tell you about it…

I woke up and worked till noon, headed to the gym for a after noon workout (after a quest bar because #i’mnotthatcrazy), worked out hard (like sprints and weight racks and weight machines and abs hard), ran errands for groceries and mailing a few items, started laundry at home, got my husband and I coffees and dropped his off at work. Headed home and got their shortly before he was home.

At this point in the day I could have threw in the hat and tossed one up to left overs reheated and us sitting down to watch a show. But I had better cheesier plans than that….

I had pinned on Pinterest a recipe for Strawberry Balsamic Vinaigrette pizza, and I added a simple few twists to make it my own…and it was good. Really good. 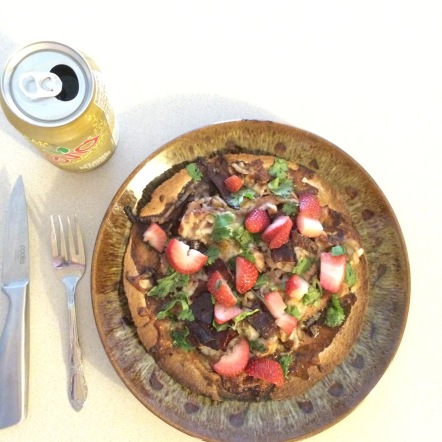 Mouthwatering goodness at your service.

However I digress, back to the HOW of this pizza shall we?

I started it all at once and was finished shortly thereafter… 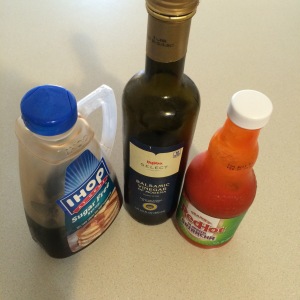 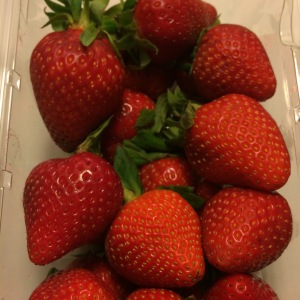 For the Sauce of the pizza you are going to bring Balsamic Vinegar to a frothy sort of boil in a fairly small pot you don’t need too much (my husband can attest as the vinegar definitely cleared his sinuses ha), after the boil I added Maple Syrup and a small amount of chili sauce as the recipe below will show you.

Um all I can say is WOW; this mixture really adds a pop to the way the chicken and cheese taste all together in the sauce. I was amazed at how well the combination came together in the end.

Strawberries are chopped very small for the sauce mixture, you won’t need to many for that part but I thought they added a little bit of thickness to the mixture. I did chop all the strawberries though as you’ll need bigger chunks to put on pizza when it’s done. 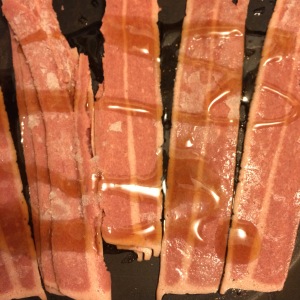 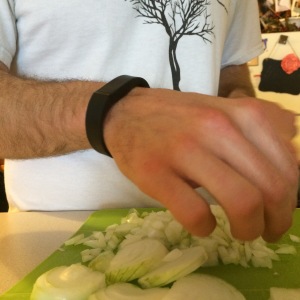 Alert (hunky hand is my husbands….thats all).

I cooked up the bacon with no seasoning other than some drizzle of SF maple syrup, because more of the maple is ALWAYS a good choice in my books…

My husband diced up yellow onion to place in the pan with the bacon after if was somewhat burnt on the edges, cook yours how you prefer, I left mine not entirely crispy, which is how I usually like it, due to the fact that it would be in the oven for minutes after this process as well.

The aroma coming from my kitchen after the sauce mixture was stewing and the bacon and onions were marinating was amazing! 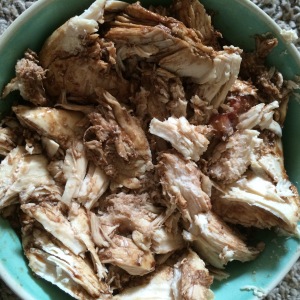 This is the chicken mixed with sauce, not that appetizing looking, it’s the sauce’s fault thanks to brown balsamic viniagrette.

I used pre packaged cooked skinless boneless chicken breast strips unseasoned for my mixture, I also made this pizza again for this weeks meal plan and in that case I just put about 5 chicken breasts (frozen) in the crock pot straight out of the freezer with 1.5 cups water and let it sit for about six hours till breasts were tender enough to just fall apart. Either works great. 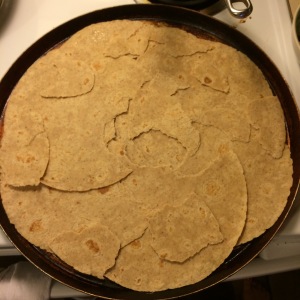 Now onto the crust, what is that you might ask, the crust. =) (how good was that explanation.)

I don’t dislike pizza crust but I believe that is what turns me off to it in the first place…so when looking at thin and crispy crusts I noticed they were placed right next to tortillas made by the same company…yes please. I LOVE baking tortillas to get that crispy texture and I thought it would pair really well with the texture of the pizza. This photo above is my husbands handiwork, artsy. 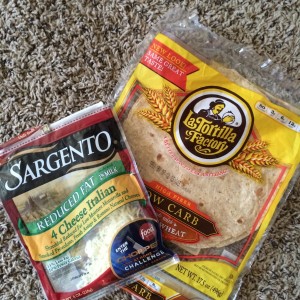 There’s the infamous Tortilla’s and I used this Sargento cheese. Which is also brilliant with 34 degrees crackers, but that’s another post ;). 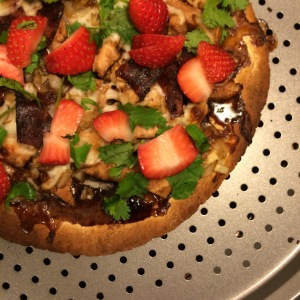 Ta da! Fresh out of the oven and tasty…Maybe it was the crisp of the tortilla paired with crispy bacon, the sweet of the strawberries and bitter of the cilantro, maybe it was the salt of the cheese paired with the soft texture of chicken, maybe it was I’m just a really great pizza maker….okay probably wishful thinking on that one…but hey it’s great and I wanted to share it with you.

So with no further a-due, I give you My take on Strawberry Vinaigrette Balsamic Pizza.

I pretty much had my maple syrup drizzled bacon cooking first, and then I started to mix up the sauce, I let my balsamic vinegar boil once boiling I reduced the heat down to low on my oven top and added in maple syrup and chili sauce.

I cooked up the bacon not too burnt, as it will cook more in oven, added the onions once my bacon was mostly cooked and chopped everything up with my spatula. (My husband graciously diced up half of the onion before I added that to my bacon mix) Then I spatula cut the bacon into pieces.

Once the sauce mixture sat mixing for about five minutes I added half of it to a bowl with my chicken mix and mixed it all together, then poured the rest of the sauce on the pizza and laid my chicken on top of the sauce.

I added some of the cheese then covering most of the chicken and sauce, on top of that I put the bacon and onion mix. More cheese please after that on top! (just like a cherry right?)

Pop that baby into the oven for about 15 minutes, and pull it out! While it’s still hot place larger chopped strawberries over the mix and pull apart fresh cilantro to place on top.

Everybody Clap Your Hands…. 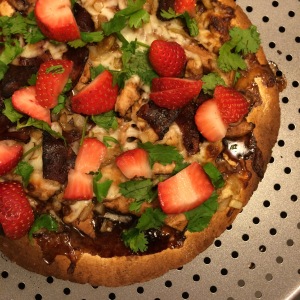 I also made a version without the strawberries and froze it for our weekly meals. 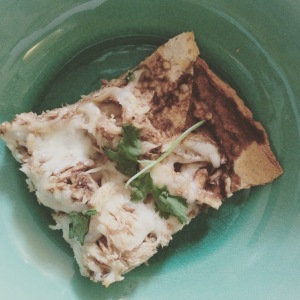 So that’s another option…and hey now that I found a pizza I like it’s cool to have options.

What do you guys think of the recipe?

Is it strange but good material?

This entry was posted in Uncategorized. Bookmark the permalink.

One sip at a time

Kate Lives Healthy
Speak Unto Others

The Art and Craft of Blogging

The latest news on WordPress.com and the WordPress community.